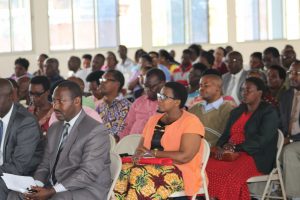 As a tradition, GIA holds two Parents General Assemblies : One at the beginning of the year and the other at the end of the year. The first meeting is meant to orient new parents to the school and other parents while the last one is to inform the parents on the success of the year, evaluate the year together and familiarize them with the following year’s plans

The 2017/2018 Parents General Assembly registered a very high attendance. It was a success. The main Assembly was preceded by a briefing to the parents of grade 10-12 on issues to do with PSAT and SAT registration. Later, all parents assembly and were informed on notably: The General School Life, Academics, Health and hygiene, Discipline and School’s Financial standing. A plenary session was later availed to the parents for them to air their views, suggestions and general contributions. The parents were also informed on the upcoming ACSI soccer games in Dar Es Salam and the Basketball friendly match with  Kigali Christian School in Kigali – Rwanda.

SAVE & ACCEPT
Secured By miniOrange